A guide to cake heaven: These are among Aalborg’s best rum balls

The history of the Danish style rum cake – or rum ball if you translate directly – is far from romantic.

These legendary cakes came about due to leftovers and day-old cake that the bakers couldn’t sell.

The bakers had the bright idea to add jam and rum essence to the day-old cake and voilá! – the classic rum ball sprung into existence.

Although time, like a stream, flows and creates change, the rum ball has resisted these currents and, against all odds, not faded out of existence. Instead, these cakes continue to appear on the present-day bakery shelves.

Today, the rum ball is not considered an unwanted leftover or solely made to avoid food waste—quite the contrary. It has a prominent space in bakeries, and bakers and confectioners alike are competing to present exactly their version of the ultimate rum ball.

Quite recently, Mabel Kafferi announced their plan to become the city centers exclusive supplier of  Danmarks Best Rum ball, which originates from Nørre Aaby on Fyn.

This announcement has brought out the city’s rum ball enthusiasts, and now it seems that the rum ball is receiving the same amount of hype as the donuts did this summer.

Therefore, we embarked on the dangerously delicious Tour de Rum Ball in search of Aalborg’s best.  We limited our search to the downtown bakeries and highlighted those that stood out from the classic version.

If you are familiar with the rum ball, perhaps you already have a favorite – if so, tell us in the comments on Facebook and help us spread the rum ball recommendations.

The first stop on our tour was Othellobageriet, which has been in Aalborg for over 100 years.

Here you can see how the perfect rum ball is rolled and made to enjoy.

Although not the most beautiful-looking rum ball on our tour, it’s the inner beauty that counts here. The rum ball is exactly as it should be. 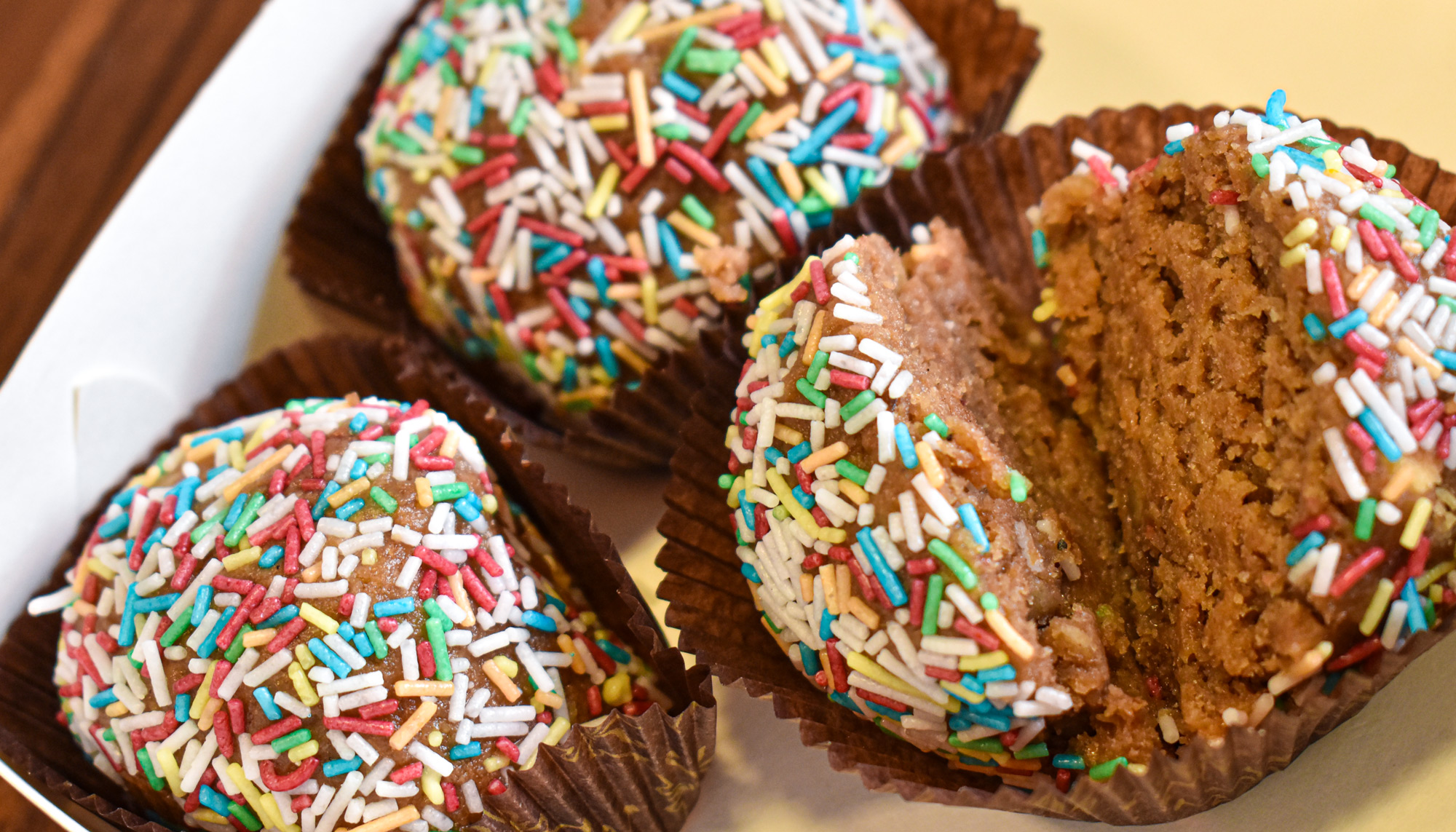 The rum ball is very soft and moist – and it’s pretty obvious that the tradition of repurposing other cakes is still well and alive at the bakery.

This means that the rum ball is made of smaller cake pieces, and the classic taste really takes you back to a simpler time.

Additionally, the rum ball is rolled in the classic Tivoli-chocolate sprinkles, which always is a winning combination in our book.

We recommend this rum ball if you seek a classic take that is 100% its own.

The next stop was Lagekagehuset and naturally, they also have an opinion on how a rum ball should look and taste.

This version was heavier with a milder rum flavor.

The rum ball practically melts on your tongue but before you get to that point, you’ll experience a nice bite through the dark chocolate shell.  On top of this, it’s been rolled in sprinkles. 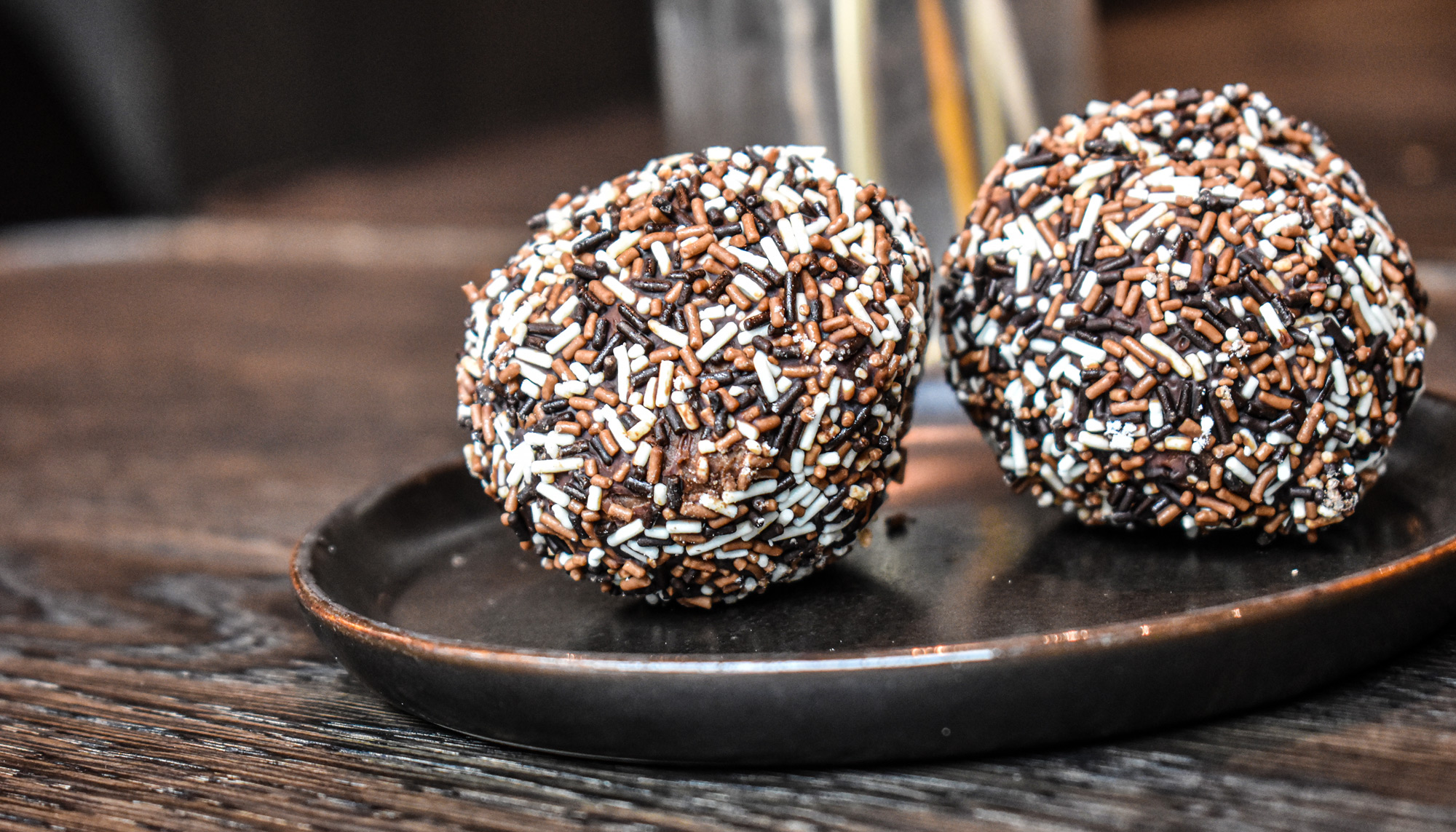 Lagkagehuset told us that their rum balls are made from other cakes that have been specially baked to combine and create the rum ball – so no unwanted leftovers here.

That is simply magnificent!

You should consider this rum ball if you want a classic with a hint of sauciness.

As mentioned earlier, Mabel’s rum balls are delivered from the Nørre Aaby Bakery on Fyn, which earned the title of Denmark’s Best Rum Ball.

Since then, Mabel has sold many rum balls and  – admittedly – we have also been there several times to get a bite of heaven.

Nørre Aaby’s rum ball was first and foremost a delightful sight. Today, Mabel offers several colorful variations of the winning cake so anyone who’s not feeling the standardized version will also be satisfied here.

In this guide, we’ve gone with the winning rum ball though that’s thoroughly brown – inside and out. 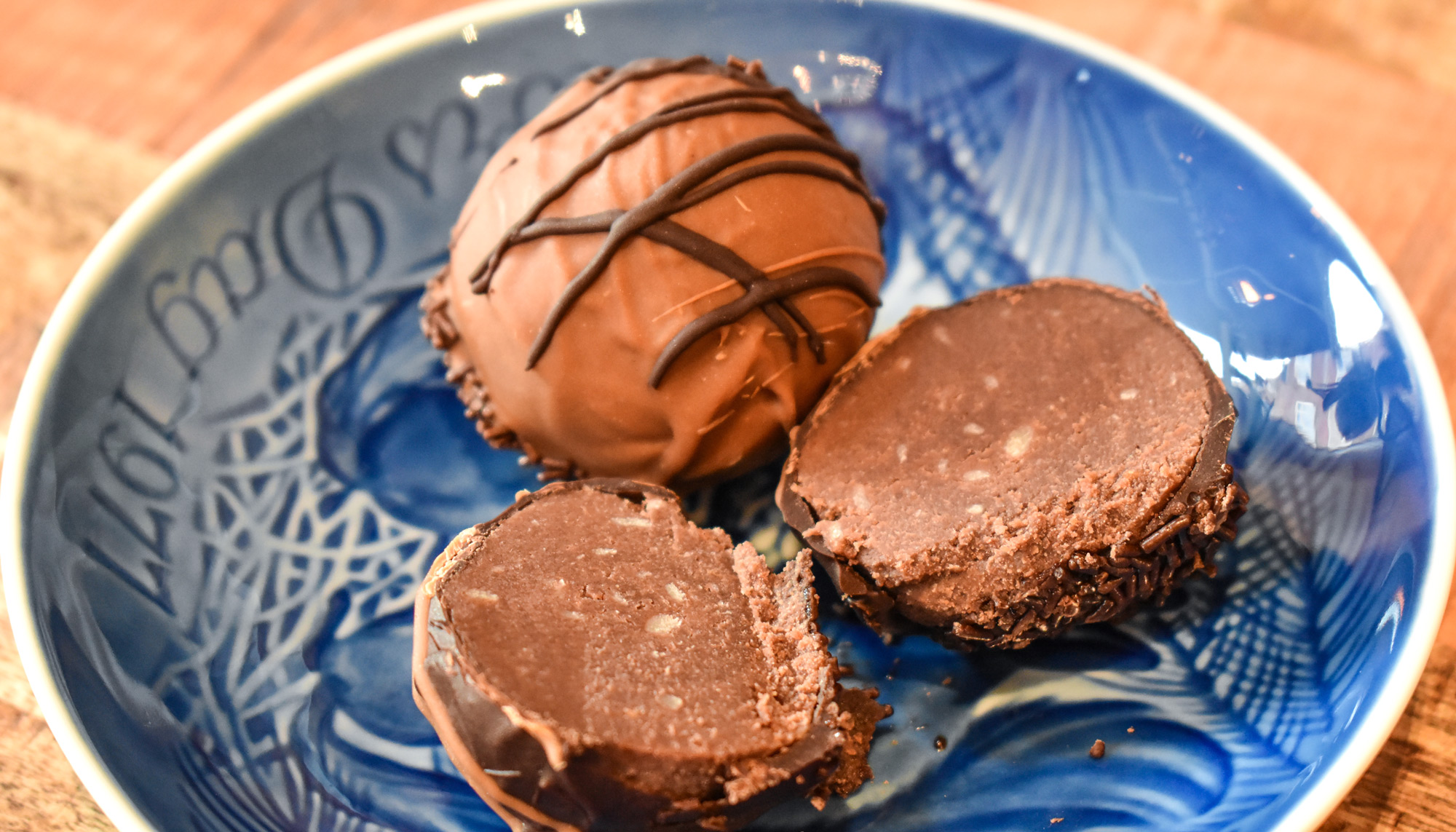 In regard to taste, this particular rum ball is on the beat. Some people have stated that they think it’s synthetic in taste but no matter how many times we’ve tried it, the taste is still intensely delicious with natural flavors of chocolate and rum.

We are crazy about it!

You should choose this rum ball if you want to impress your guests.

In June, Penny Lane announced that they would be entering the battle for the title Denmark’s Best Rum Ball.

In doing so, they turned to innovation when creating their rum ball.

The rum ball still includes classic ingredients such as different cakes and raspberry jam. The ace-in-the-hole is salted caramel. This caramel oozes out after your first bite. Additionally, the rum ball is topped with a golden crunch, and Belgian chocolate fills and coats the cake. The filling is perfectly smooshy and balanced with rum flavor that will not overwhelm.

The taste is beyond delicious.

As such, Penny Lane’s version is perfect for those who do not require the classic rum ball taste of the mixed cake and rum essence. The rum ball will surely leave anyone completely satisfied.

You should choose this rum ball if you do not desire a wholly classic taste but dream of being enchanted in a whole new way.

In one of the city’s classic bakeries, of course, there is a rum ball on the menu – but it is far from traditional.

The first thing you think when you see La Bonta’s version of a rum ball is…why is it not round?

At the bakery located on Gravensgade, the rum ball resembles more of a rolled log-cake, making it distinctly different from all other rum ball experiences on our tour.

La Bonta explains that the form is created when they roll out the dough into a long cylinder shape before they cut it and cover with Belgium chocolate and sprinkles. 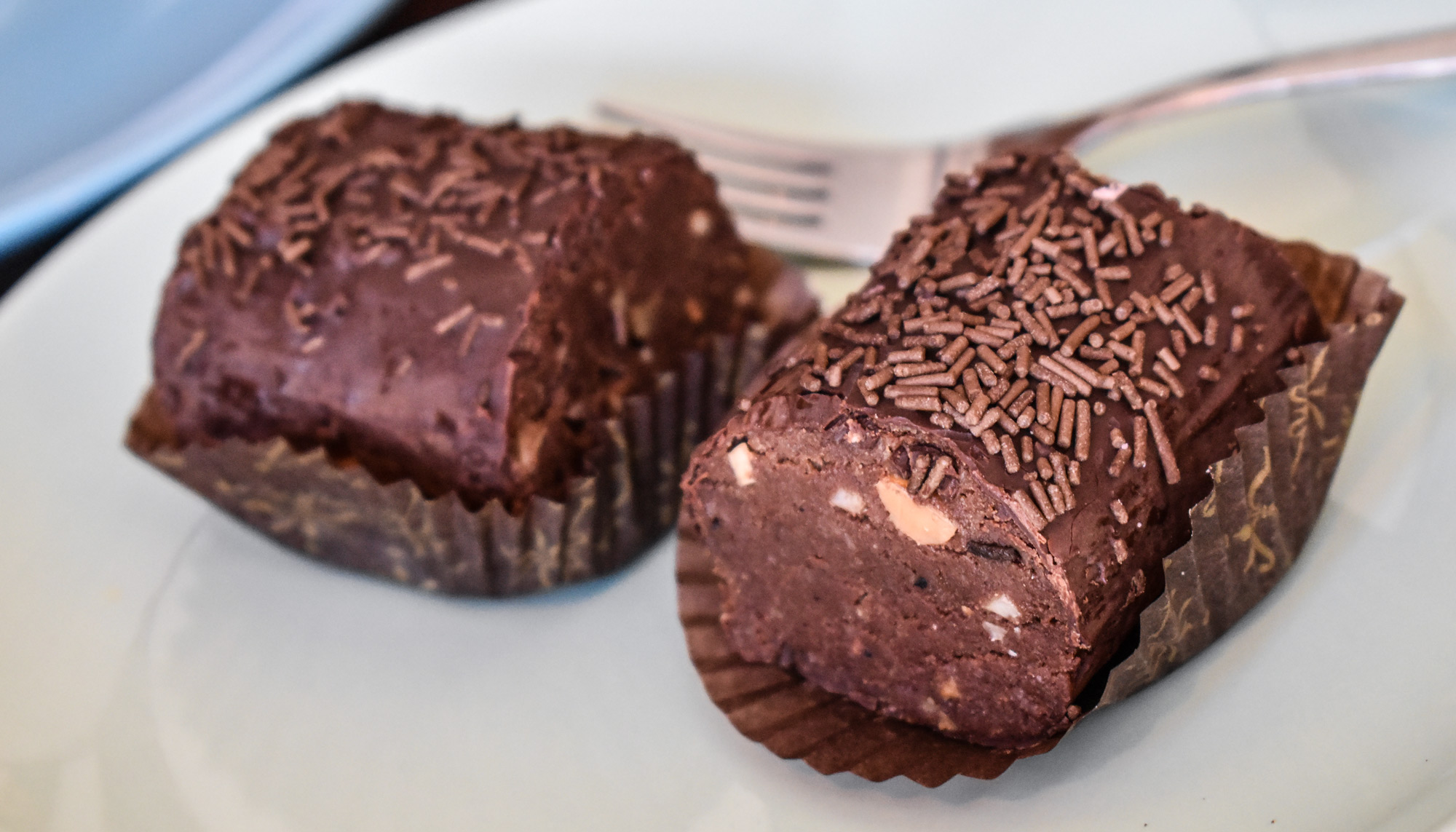 Nonetheless, this rum ball offers a clean and satisfying taste.  The classic rum ball also provides a worthy crunch – followed by a taste of marzipan. Most likely a result of various confections added to the dough.

This means you experience a dense and textured consistency that delightfully sticks to your fingers as you eat.

And that is a compliment!

You should choose this rum ball if you desire a classic taste but dare to change your shape.

The next stop on our route was at KaffeFair on Strandvejen where they pride themselves on having a pastry chef on staff.

Winnie is probably the most ambitious we met during our rum ball tour.  In any case, she is convinced that their version is worthy of the Best in Denmark title.

For good reason, we can’t argue this matter ourselves (as we’re missing a few) but we do agree that KaffeFair does have a right to be a little arrogant. It’s really good.

KaffeFair’s rum ball is actually made from leftovers – but these leftovers come from their well-known and beloved brownies that are cut into shapes before being sold.

As a result, a good portion of leftover brownie makes its way into the rum ball – anything else would just be ridiculous. 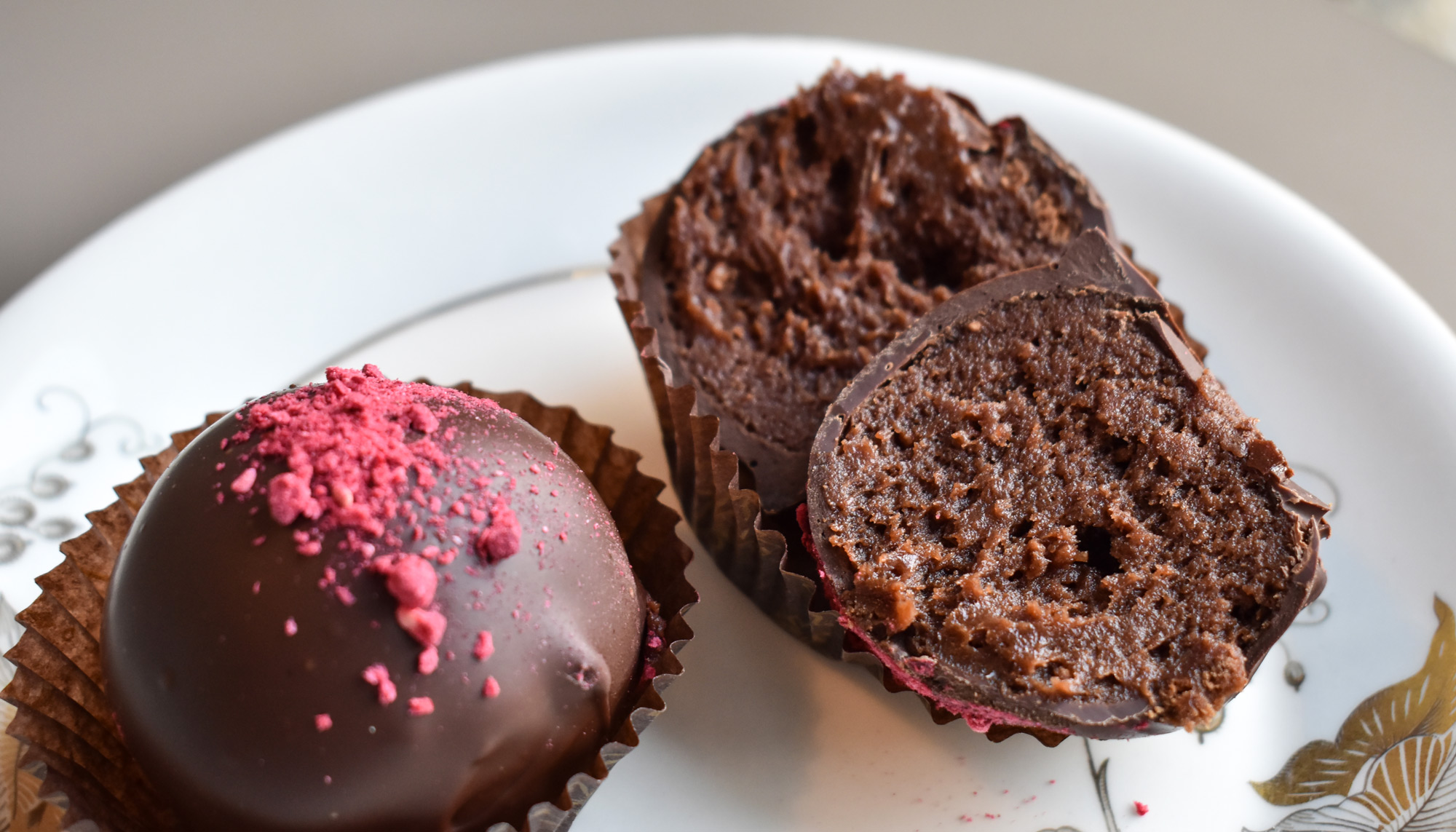 There were two of us on this rum ball tour, and we’re not afraid to admit that one of us managed to communicate a lot of praise while practically swallowing the cake whole.

You should choose this rum ball if you feel a little snobbish, and only the best will do.

The last stop on our tour was a bit far out. But our goal was to sample a wide range of rum ball experiences.

So, of course, WeFeat should have a chance.

You might think: WeFeat? They are known for serving healthy and nutritious food. Can a rum ball be that?

Well yes! – if you allow yourself to think of this as a rum ball. We’ll leave it to our readers to assess for themselves.

We personally think that this deserves to be represented if you are among those who don’t feel like devouring a whopping 400 calories of sugar and chocolate in the same meal.

This rum ball is simply made without sugar and gluten. Referring to the ingredient list, you will find chickpeas, dates, peanut butter, coconut milk, cocoa, coconut fat, rum aroma, and salt.

… and it tastes good! The consistency works, and the crunchy cocoa nibs on top is a really delicious detail. So yeah, it tastes like rum ball, not in a sweet (and sometimes sloppy) way, but as an authentic rum ball experience.

Therefore we recommend this version… if you dare.

You should choose this rum ball if you like a good rum taste but you also want to keep your blood sugar in check.

At WeFeat, you get 1 rum ball for 30 kr., but if you are a member of  ClubAalborg, right now, you get a coffee and rum ball for half price.