The transformation of a grey parking lot to a green haven was easy to see, and since then Budolfi Plads has been a place for socializing and great experiences.

Early last year, Budolfi Plads was supposed to lift Christmas spirits by displaying a new form of lighting. But this event was postponed due to corona.

However, this year Budolfi Plads  will not disappoint on the Christmas front. The heart of Aalborg shines brighter than ever; now literally in the form of a heart.

Through unique cooperation between Budolfi Plads and its tenants, the investment in the heart decoration is like a gift for the city – lifting our spirits. 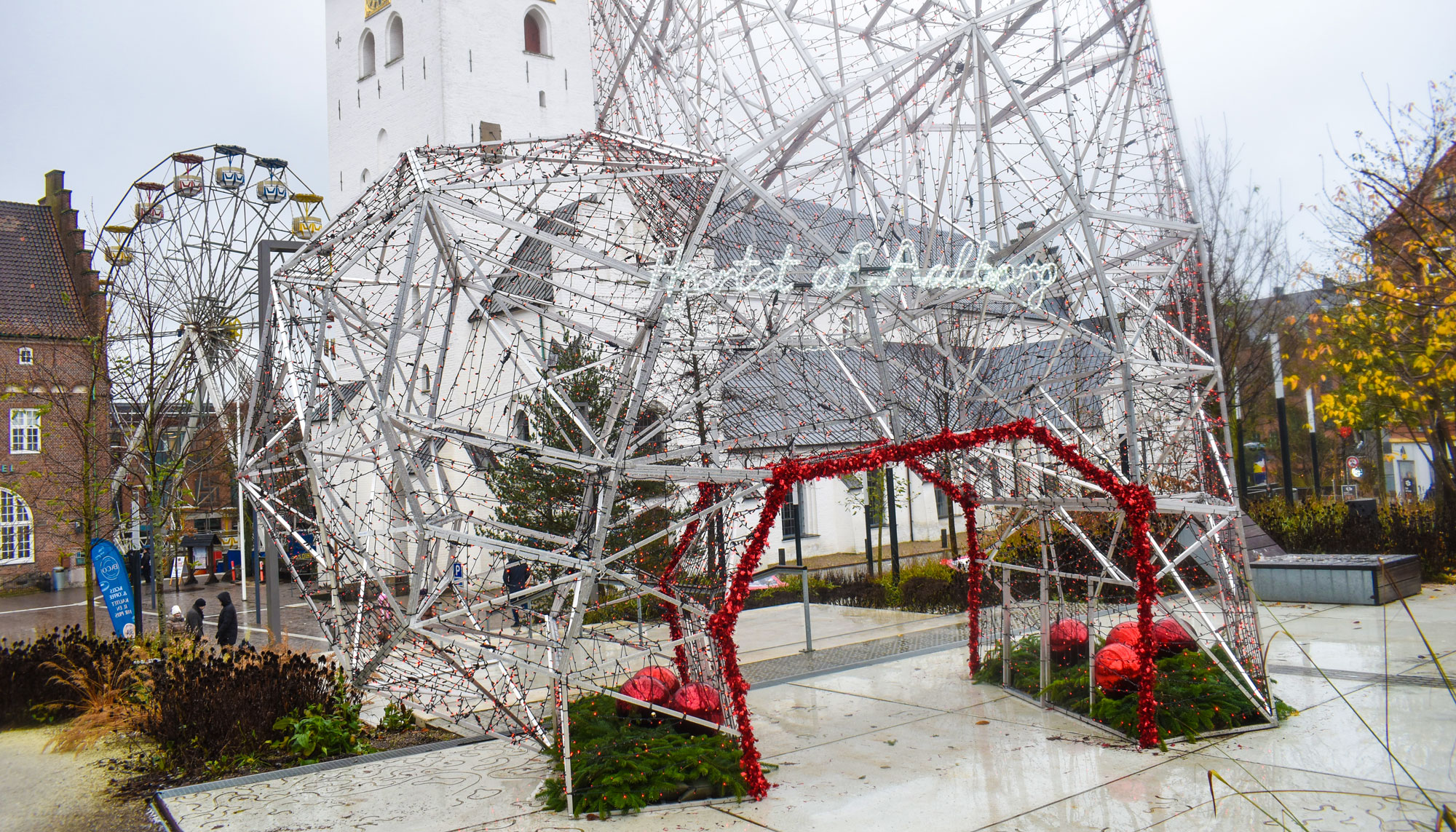 Christmas is the party of hearts

Lars Jeppesen and Eco2Light, who are also partners in Christmas at the Zoo, are responsible for the design, development, and installation of the heart – and we are more than satisfied with the results presented.

“I think it’s amazing how the tenants of Mikkel Højsleth and Budolfi Plads are taking initiative to do something in our historic and beautiful square and do something good for the citizens of this city. It’s great,” Lars said at today’s announcement.

“In terms of design, we are trying to create an installation that is part of the entire square and cathedral. If you stand next to the restaurants Det Glade Vanvid and Skagen Fiskerestaurant, you can see the heart resting against the church.”

It’s the first time in almost 50 years that Christmas is celebrated this way in the heart of Aalborg, but with the new Christmas lighting, the square is not only for the memories of Christmas past – but also of the future.

Something the large, shining heart will initiate.

“Christmas is also the party of hearts, so in this way, it kind of just makes sense,” Lars says poetically.

Aalborg has retaken its heart

In addition to the heart, there is a genius selfie spot with silhouettes of the city’s landmarks (that you may have seen in Aalborg Zoo).

As you walk up the large staircase to the square, you are greeted by a giant, red heart with letters that form “Budolfi Plads”.

And it’s no coincidence that a heart has been chosen as the symbol of the square.

“When Budolfi Plads opened, it became a symbol of Aalborg regaining its green heart, and that’s also the idea we’ve taken with us to mark this Christmas.

In the old days, the square was often used at Christmas time for tree sales. So for us, it was also about recreating a nostalgic social spot that everyone can enjoy – even in winter,” Mikkel Højsleth explains.

And speaking of the old days, you can refresh your historical horizon as you walk through the Christmas square.

In cooperation with Aalborg Stadsarkiv (the city archives), Budolfi Plads has filled the so-called Love Path with historical facts and pictures from Budolfi through time. 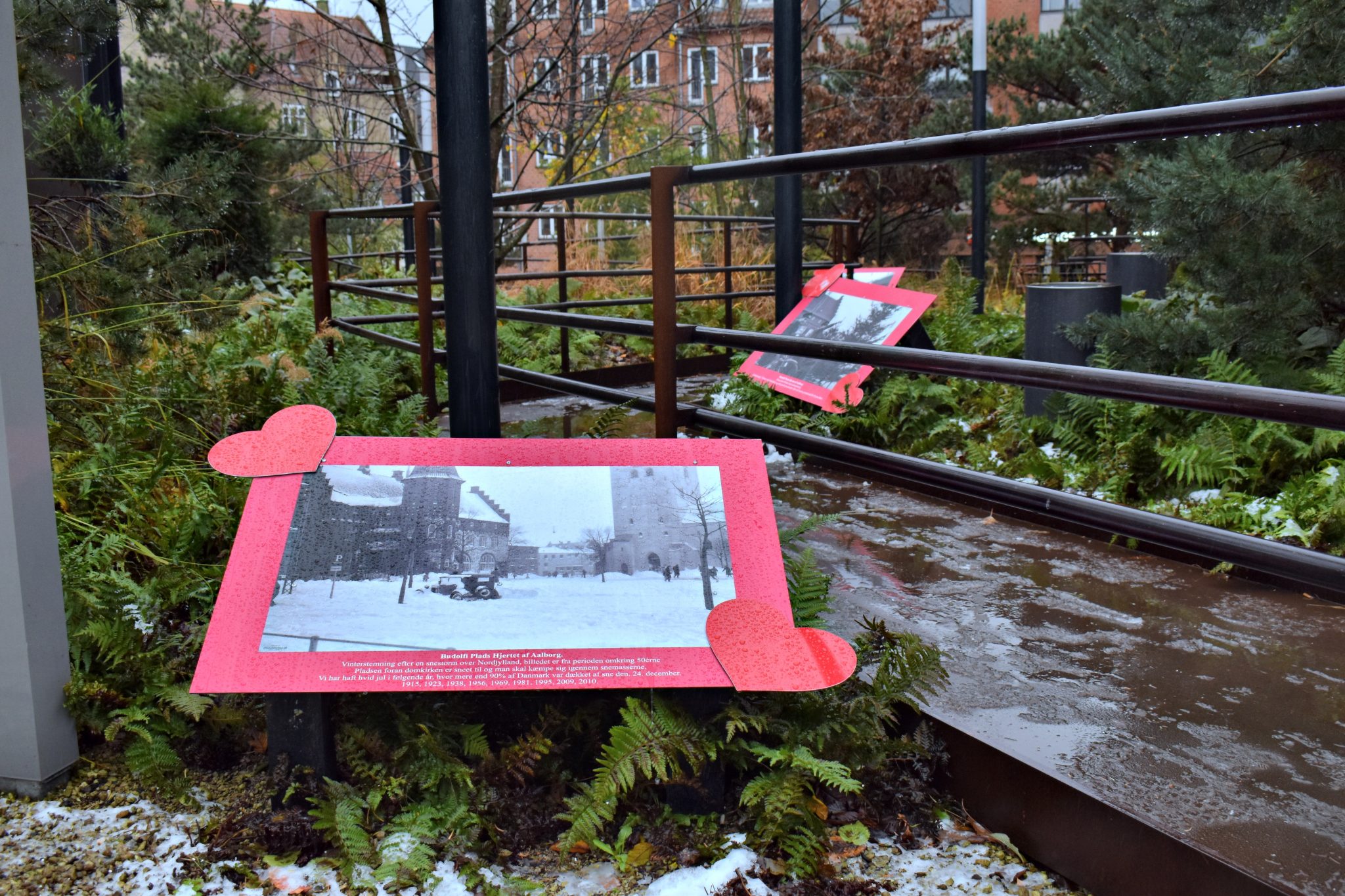 Mikkel Højsleth explains that they plan to make the Christmas decorations a permanent tradition on the square, which they can develop year after year:

“We already have some ideas for next year that we need to work on. Hopefully, it will be in cooperation with the city’s stakeholders, so we can look together at how to make Aalborg the best Christmas destination in Denmark,” he says.