Large bridge-project has started: This is how it affects traffic downtown

The bridge that crosses the railway tracks on Vesterbro is worn down and that’s why it’s getting replaced. The renovation started on Saturday and will continue until September 16, 2022.

At the same time around, the garage underneath the bridge is also getting renovated while the railroad is getting electrified.

Vesterbro is getting shut down

The work will naturally affect the traffic the next many months, and that’s why Aalborg Municipality has created a website where you can keep up with the work. You’ll find it here.

There’s only one lane open in both directions during pretty much the whole renovation process. However, the bridge will be shut down completely during the following periods:

Road blocks during the construction period

To create the most optimal flow of traffic on Vesterbro, the parts of Kirkegårdsgade, Hasserisgade, and Prinsesgade that led out to Vesterbro will be blocked during the entirety of the renovation.

On top of this, you won’t be able to turn left to Stengade/Gåsepigen – just right turns are allowed.

Are you going to the Aalborg Hospital North, you have to pass through Urbansgade.

To avoid queuing and also lessen the pressure on Vesterbro, the municipality recommends the following, alternative routes.

Are you coming from the south (Hobrovej) and headed to the center of the city, you can turn on Østre Allé and drive to the parking garages by Salling, Føtex, and Friis Shoppingcenter.

Are you going to Aalborg train station, it’s not possible to use Prinsesgade. Choose Østre Allé instead and drive on Jyllandsgade to the station.

If you’re going to the center of the city from the north, we recommend that you use Strandvejen and use the parking garages by Salling, Føtex, and Friis Shoppingcenter.

Recommended routes to the center of Aalborg from the north 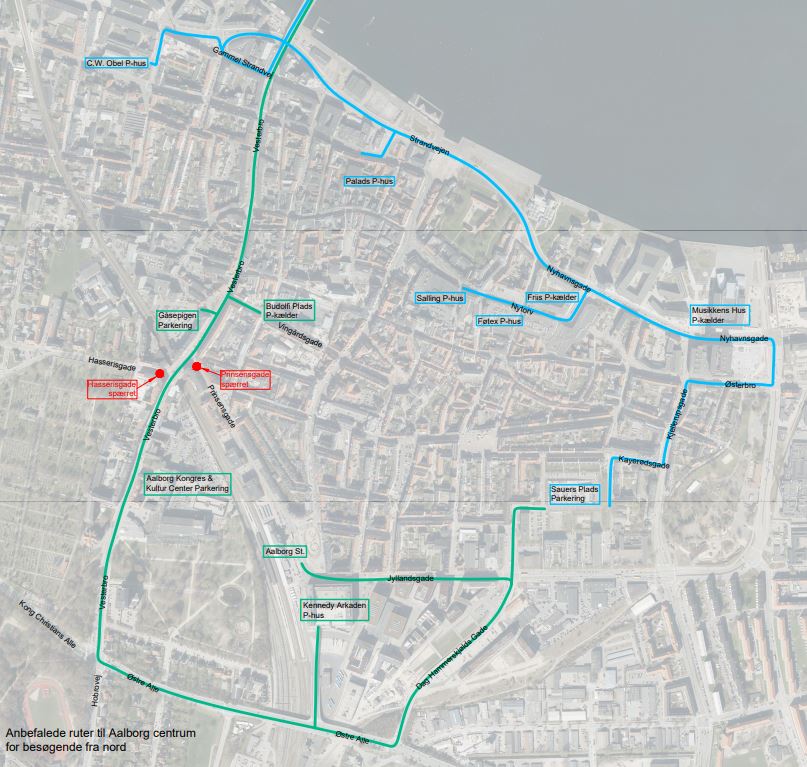 Recommended routes to the center of Aalborg from the south 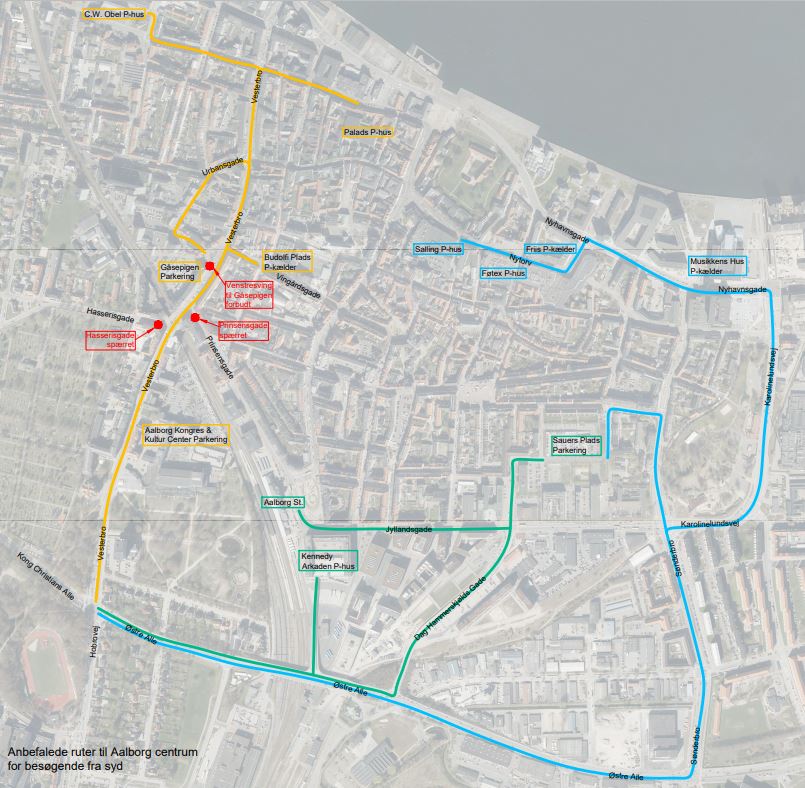 Alternative routes for cyclists and pedestrians

Although cyclists and pedestrians can pass the bridge during most of the renovation period, the path they share will be narrow on a short stretch of the road. So it’s recommended that you pay attention and look out for each other – and preferably find alternative routes while the new bridge is being constructed.

It’s recommended that cyclists and pedestrians use the following route between Hasserisgade and Prinsesgade when they work on the west part of the bridge. 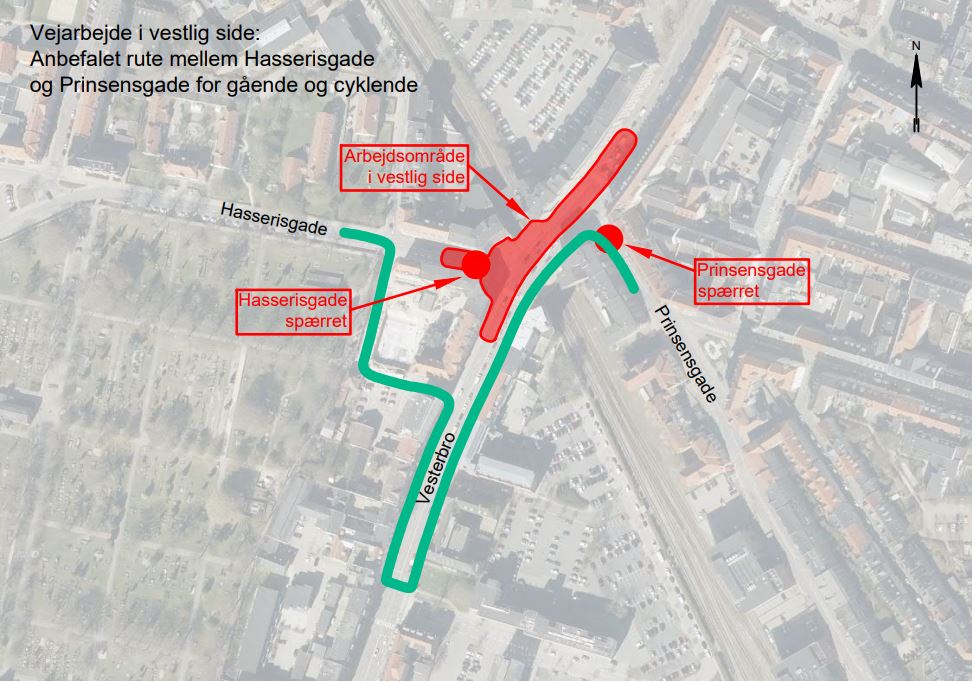 They recommend that cyclists and pedestrians use the following route between Hasserisgade and Prinsesgade when they work on the east part of the bridge. 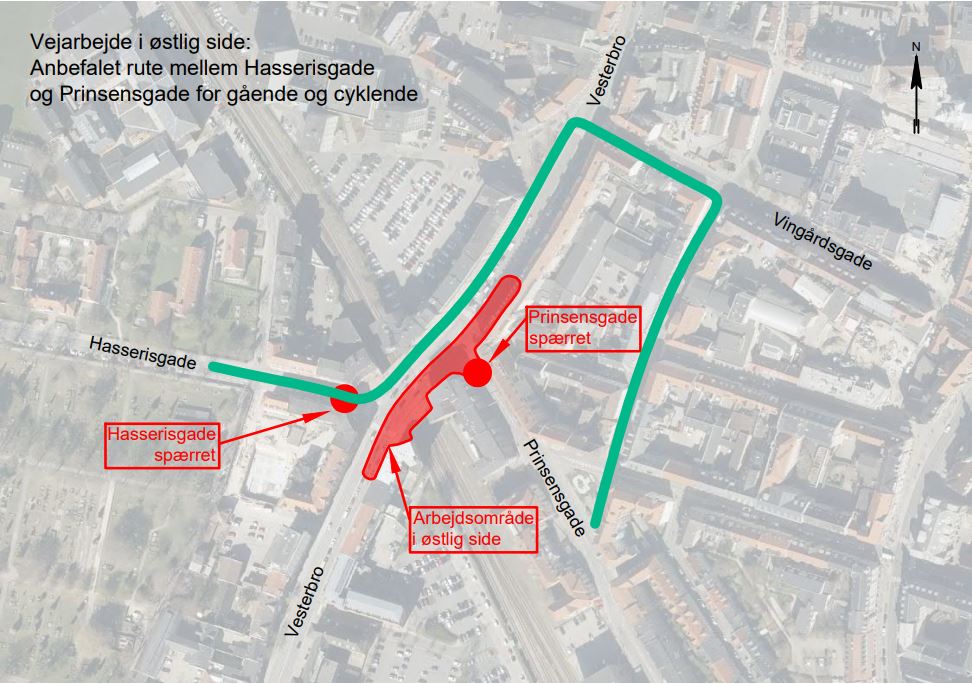 Route between Aalborg Station and Saxogade

Prinsesgade is blocked during the entire period. Are you going to Vesterbro or Aalborg Handelsgymnasium or Aalborg Katedralskole, you can use the following route. 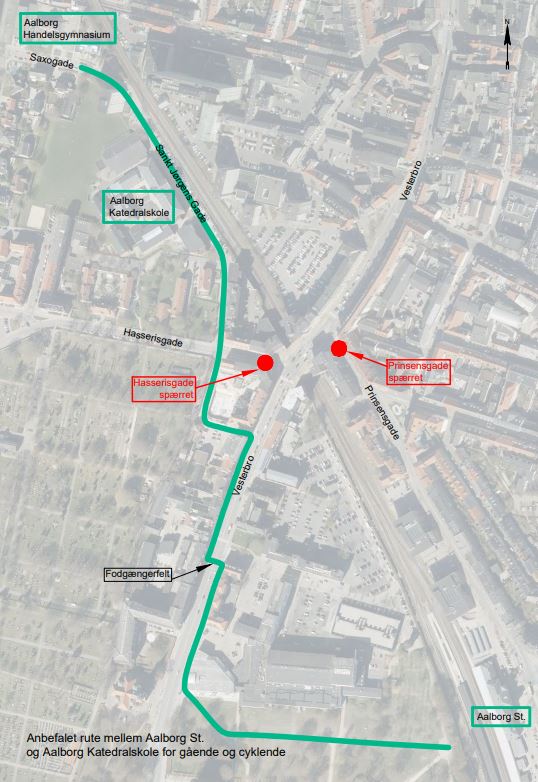 The bridge is very worn

The bridge on Vesterbro was completed in 1930 and since then drivers have been able to pass the railway tracks by Hasserisgade.

But now, almost 100 years later, it’s down for the count.

Although there’s been periodical maintenance through the years, the bridge is now in so poor shape that it’s no longer possible to extend the bridge’s life.

That’s why the old bridge is being torn down, and the new bridge is getting erected.

“The bridge is very worn out and has needed more than just a loving hand for a while.

But it has taken more coordination with Banedanmark (note: the company responsible for maintenance and traffic control on all of the state owned Danish railway network), which owns half the bridge, and that is why we are happy that it is finally possible to replace the bridge,” Kim Brun Kristensen, project leader from City and Landscape in Aalborg Municipality, says.

You can stay updated on the work here.